Would you vote for these men? 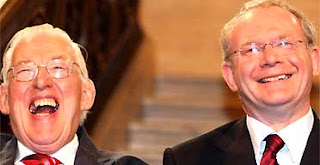 All smiles at Stormont yesterday as Ian Paisley and Martin McGuinness were sworn in as Northern Ireland's first minister and deputy first minister respectively. It's the picture we never thought we'd see, etc, etc, and as he contemplates retirement Tony Blair should certainly be proud of his contribution to the peace process. But if Northern Ireland has come a long way in the last few years, there's still a long way to go before it's a 'normal' country with normal, non-sectarian politics. I sometimes wonder if those of us on the other side of the Irish Sea aren't a little patronising as we cast warm, approving glances at events across the water, happy to celebrate political arrangements there that we'd never tolerate in our own backyard. Put it this way: would you be happy if either of these two were the elected leader of your country?
Posted by Martin at 18:30