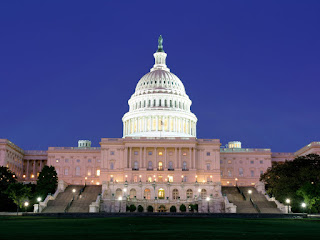 Apologies for light posting lately: things have been rather hectic here at Margins Manor. And the scarcity of postings is about to get worse. We're off to Washington DC at the weekend for a spot of half-term sightseeing. Just our luck that our first day there will coincide with this event (but perhaps the President will emerge to cheer them on).
It's hard to believe that our last visit to the city was three presidents ago. This time we'll be staying in Georgetown, so you never know, we might run into a couple of the locals on M Street. Unfortunately, we haven't yet discovered any political events happening during our stay to match the star-studded panel discussion we attended in San Francisco a year ago. So if you live in the DC area and know of any lectures, seminars, book-signings next week that might appeal to a couple of visiting political obsessives, please let me know.
I will (of course) be providing a full account of our travels on our return at the end of next week.
Posted by Martin at 15:58 No comments:

Last year I argued that the growing habit among politicians of wearing poppies weeks before Remembrance Sunday risked cheapening the memorial and looked suspiciously like more-patriotic-than-thou one-upmanship.

I’ve just watched a video of former Labour minister Tony McNulty on yesterday’s Daily Politics – and there in his buttonhole was a poppy, more than three weeks before Remembrance Sunday. Could this be the earliest ever example of Premature Poppy Wearing? Can anyone beat it?

This blog has often bemoaned the decline of liberal, engaged Catholicism - and its replacement by a strident, reactionary anti-modernism - so it gladdens the heart to come across signs that all may not be lost. This pro-gay marriage ad from Maine features the Catholic mother of a gay man. Key quote: "I've been a Catholic all my life. My faith means a lot to me. Marriage to me is a great institution that works, and it's what I want for my children, too."
Predictably, conservative Catholics are outraged and, in a move that demonstrates their utter lack of understanding of contemporary, pluralist democracy, have demanded that the ad be removed from the airwaves and from Youtube.
(Via Andrew Sullivan)
Posted by Martin at 07:23 5 comments:

Into the garden now...

A little bit of early Seventies Brit-folk nostalgia for a wet Wednesday afternoon. No reason, really: except that The Poor Mouth has put up a version by French band Dark Sanctuary, along with a lot of photos of their final concert. All of which sent me scurrying back to the even more haunting Trees original, which I'll always associate with my much-played and scratched copy of the 1970 compilation Fill Your Head With Rock, where the track sits alongside other gems such as Laura Nyro's 'Gibsom Street' and Tom Rush's 'Driving Wheel'. Enjoy.
Posted by Martin at 16:01 1 comment:

Dancing in the aisles

After The Sun's announcement that it's deserting Labour, there's a kind of poetic justice in the decision by Waitrose to boycott that other arm of the Murdoch empire, Fox News. It seems the supermarket's customers are unhappy about its ads appearing alongside the increasingly unhinged anti-Obama rants of right-wing loon Glenn Beck:

"We take the placement of our ads in individual programmes very seriously, ensuring the content of these programmes is deemed appropriate for a brand with our values," said a customer services spokesman. "Since being notified of our presence within the Glenn Beck programme, we have withdrawn all Waitrose advertising from the Fox News channel with immediate effect and for all future TV advertising campaigns."

Some may be surprised at this outburst of political sensitivity from an upscale high street food retailer, but remember that Waitrose is part of the John Lewis chain. And as my nephew (who has a Saturday job on a Waitrose fish counter) reminded me recently, the founder of the department store chain, John Spedan Lewis, was a radical entrepreneur who established a system of employee ownership which continues to this day. I had some experience of this when the adult education project I was running in the '80s was approached by the local John Lewis store to provide literacy classes for some of its employees, who were always referred to as 'partners', however lowly their job. OK, so it's not exactly workers' control, but it's better than nothing.
I'm no great fan of boycotts, but it's surely a healthy sign that a number of companies, including Wal-Mart, have now decided to pull their ads from the Beck show, because they fear being 'tainted by association'. How long before the Republican Party wakes up to the fact that its brand is being similarly compromised, and distances itself from the Becks, Bachmans, Palins, Limbaughs and other assorted birthers, death-panellists and conspiracy-theorists?
Posted by Martin at 17:12 No comments:

The first in a new series, in which this blog will seek out and expose attempts to suggest an equivalence between terrorist outrages and the actions (often in response to those outrages) of western governments. False Equivalence Watch is inspired by a belief that these rhetorical sleights of hand, however seemingly trivial, risk creating an unthinking consensus, and corrupting political discourse - if they go unchallenged.
First up is The Rough Guide to Washington DC (2008 edition), which I've been reading in preparation for a forthcoming visit. The section headed 'Visiting the Capitol', on page 108, begins with this sentence:

With all the terrorism and war-making of recent years, access to the nation's legislative body has become more restricted.

Say what? I can see how access to government buildings became restricted as a result of the terrorist attacks of 9/11. But as a consequence of 'war-making'? Presumably this refers to Iraq and Afghanistan. But how have those campaigns led to security restrictions at the Capitol? Oh, I see. We're supposed to think that all that 'war-making' (a choice of phrase that itself speaks volumes, don't you think?) has led to an enhanced terrorist threat - rather than vice versa. And of course we all know, don't we (knowing wink to right-on Rough Guide-type readers) that the terrorists were only responding to all that western war-making and imperialism in the first place...
You see how this works? By positing an equivalence between these two things, you also suggest a causal link between them. Except the causality is back to front. So this neat rhetorical device not only helps faux-liberals avoid the discomfort of having to condemn non-westerners, but it also makes it possible to pin the ultimate blame where they think it really belongs - on 'The West'.
I told you some of the examples would be apparently trivial. But nothing escapes the eagle eye of the F.E.W. Watch this space!
Posted by Martin at 13:52 1 comment: