Friday afternoon musical and other musings

My latest musical purchase is Rufus Wainwright's Release the Stars. A colleague thought it was 'my kind of thing', so I made a point of watching his Glastonbury appearance on TV. He looked even more out of place in the mud and rain than Arcade Fire - Rufus is definitely not an outdoor kind of guy - but I was impressed enough to buy the album. I know his rather nasal voice and the lush orchestration are not to everyone's taste, but the boy certainly has style.

Stand out tracks for me so far are 'Sanssouci' (love those swooping chord changes) and 'Going to a Town', though I wince when European audiences cheer the line 'I'm so tired of America' - as they do when Arcade Fire proclaim 'I don't want to live in America no more' ('Yes you do,' says H. when she catches me singing along) on 'Window Sill'. At the risk of sounding pompous about a mere pop song, I wonder if American bands realise they're playing into a reflexive anti-Americanism with this sort of thing? Maybe it's just me, getting old: after all, I pogoed along with the best of them to the Clash's 'I'm so bored with the USA' thirty years ago (!) at the Cambridge Corn Exchange.

Speaking of which: Graham over at Harry's Place has a competition going on to choose one song to represent each decade from the Fifties to the present. His choice for the Seventies is the Clash's 'White Man in the Hammersmith Palais'. As a man of the Seventies myself, I'd probably have gone for something by Bowie - trouble is, what? You see, as the responses to Graham's appeal have shown, there was more than one Seventies. It would be much easier, of course, to select a song for each year. This would be my choice (highly idiosyncratic, I admit):

...at which point my inspiration, not to mention my memory, lets me down.

While we're on the subject of the Clash, let me tell you about my two near-encounters with the band. Once was after the afore-mentioned Cambridge gig, when some fanzine-editing friends asked if I wanted to accompany them backstage to meet the guys. Being a shy young thing, I hesitated and missed my chance (mind you, on another occasion I said 'yes' to the chance to meet the Buzzcocks backstage - Pete Shelley was very nice - and managed a brief 'interview' with support band the Slits - they weren't nearly so friendly - for good measure ). On another occasion I was travelling down to London from Worcester on a half-deserted train, when Mick Jones got on at Oxford (where the band had been recording). Again I hesitated and the moment again passed me by.

And then there was the time I was working in Basildon and found myself standing next to Alison Moyet in W.H.Smith, which was soon after the time I saw Dave Gahan of Depeche Mode waiting for his girlfriend outside the office building where I worked (oh, and I once performed at the same Boys' Brigade camp concert as that other doyen of the south Essex scene, Vince Clarke, long before he formed Erasure, and have the photos to prove it). Other missed rock 'n' roll opportunities: when I was 16 I was offered a ticket to see Bowie on his 'Ziggy' tour and passed it up because it was a school night - can you believe it?

When it comes to accidental meetings with famous people, there's a nice story over at Drink Soaked Trots today about Christopher Hitchens bumping into the Archbishop of Canterbury:

Back home, after weeks on the road, he’s out at a restaurant with the missus and the daughter and who does he find himself seated right beside but the Archbishop of Dang Canterbury: I lean over. “My Lord Archbishop? It’s Christopher Hitchens.” “Good gracious,” he responds, gesturing at his guest—”we were just discussing your book.”

It's the 'My Lord' bit I love: Hitch is an old charmer, really. My own chance encounter with Rowan Williams came a couple of summers ago at Land's End. We were just walking away from the awful themed visitors' centre when there he was, white beard blowing in the wind, out for a casual stroll with wife and child, seemingly unrecognised by the holiday crowds. I must admit to having an annoying habit of spotting famous people when we're out and about: whether it's Terry Waite in the Strand, Michael Portillo on his mobile at Embankment station, George Alagaiah shopping in Oxford, Emma Watson (Hermione in the Harry Potter films) at the next table at Browns in the same city....I told you it was an annoying habit.

Mention of Land's End reminds me that another period of silence will ensue here after tomorrow, as we'll be spending next week down in the south west, not far from here: 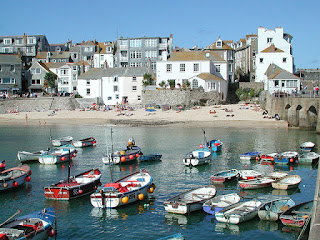