Tomorrow is the sixth anniversary of the terrorist attacks on New York and Washington.
It's timely that Butterflies & Wheels has just posted up Daphne Patai's 'Letter to a Friend: on Islamic Fundamentalism', written on September 11th last year, which criticises those on the Left whose response to the attacks was 'an orgy of "blame America first"' and argues for a progressive, feminist battle of ideas against Islamism.
Also worth a look on this anniversary is Jean Bethke Elshtain's 'Defending American values at home and abroad', which is included in the latest issue of Democratiya. Elshtain was one of the signatories to 'What We're Fighting For: A Letter from America' , a reminder that there were some on the Left who understood what was under attack on 9/11.
But perhaps the best way to mark the anniversary is simply to take a moment to remember those who died. 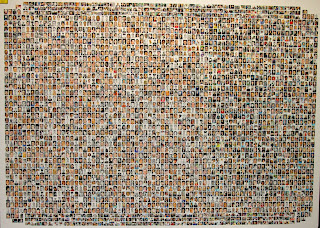 To see an enlarged version of this photomontage, click here.
Posted by Martin at 18:53