Last night I watched part of a fascinating BBC4 documentary about Daniel Libeskind, the architect whose design has been selected for the Ground Zero site in New York. The programme traced Libeskind's life from his childhood in postwar Poland, via Israel, to New York, and the trajectory of his career from academic architect, by way of his triumphant design for the Jewish Museum in Berlin, to his plans for Ground Zero.
What made the programme compelling was not only Libeskind's personal charm, and the strange beauty and dynamism of his designs, but also the understated connexions it made: for example, between the memory of the Holocaust that haunted his childhood and his response to that other massacre of the innocents on 9/11.
Libeskind's unabashed faith in liberty and social justice also shone through: he described the terrorist attack on New York as an attack on the values that the city represents, and his design for Ground Zero as the response of a democratic city to an assault on its very being.
I hope that Libeskind's plans for the WTC site become reality, and that one day we see his elegant, spiralling tower mirroring the outline of the Statue of Liberty across the bay. And I hope the BBC4 documentary gets repeated. Yesterday's news was dominated by budget cuts at the BBC, with John Humphrys harrumphing that the corporation should consider withdrawing from the 'unwatched' BBCs 3 and 4. But the Libeskind documentary was a reminder of what those channels are for, and of the kind of thing that the BBC does best. 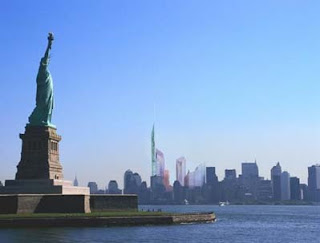