Just a bit of empty symbolism?

Today's double-page spread in the Guardian was this photo of yesterday's State Opening of Parliament: 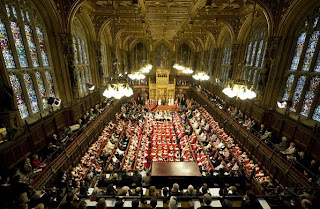 You really need to see an enlarged view to get the full effect. The paper helpfully provided a key, so you could work out where everyone was sitting during the Queen's Speech (she's the lonely white figure in the distance). The Commonwealth guests of the Lord Chamberlain are in the gallery behind the throne; ambassadors to the left of the monarch; bewigged judges immediately in front of her; clerks of the Lords and bishops just behind and to the left of them; peers (that sea of red with white bits) filling up the stalls, so to speak; peers' spouses and partners (very modish) in the kind of choir stalls either side; VIP guests in the raised gallery around the edge; and the media in the cheap seats at the back, nearest the camera.

Did you notice anyone missing from that list? It may be an editorial oversight, but I couldn't find any mention of members of the House of Commons, unless it's that huddle of figures standing in the bottom left hand corner, with the rest possibly below the press box, out of sight. OK, so it's only a picture, and I know it's a bit of ritualistic rigmarole which doesn't have anything to do with the 'real' business of running the country. But doesn't the symbolism of the picture speak volumes about our creaking constitution and our outmoded sense of who we are as a nation?

Here we have the spectacle of a hereditary head of state, setting out 'her' government's plans for the coming session, primarily to an audience of unelected legislators, with the only elected officials present - the only representatives of us, 'the people' - squeezed in at the back as if they (and by extension we) were an afterthought. The symbolism is the complete opposite of what it would be in any real democracy, in which government is truly by the people, for the people, and not loaned out to us as a favour by our betters.

it happened that i was having breakfast and i watched this live on TV (euronews) (I get up late and take breakfast even latter).

I have to say this ceremony, viewed by an outsider, is almost unbelievable, especially that part when the queen sends a guy to the house of commons to tell them that she request their presence, and then they all laughed...

As I was watching it, i was thinking 'how boring it must be to be a queen'.

and then, everybody bowing their heads, man, what is that???