Am I being over-sensitive, or does anyone else find Steve Bell's cartoon, in today's Guardian, offensive? 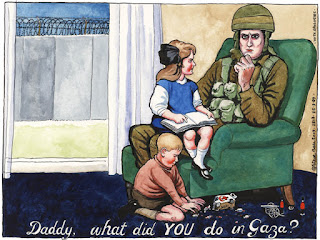 It's the subliminal associations of this image that make me uncomfortable. When I first saw the picture, which sets an innocent domestic scene against the backdrop of a wall surmounted by barbed wire, it made me think immediately of The Boy In The Striped Pyjamas, John Boyne's novel about a young boy who is unaware of his father's work as the commandant of a Nazi concentration camp. The depiction of the two children, with their blond hair, Aryan looks and Thirties-style clothing, only reinforced this parallel, making me think the resonance was deliberate.

So rather than being a legitimate critique of Israel's military tactics in Gaza, I think Bell's cartoon allies itself with the distasteful - and yes, antisemitic - comparisons made by some critics between the actions of the Jewish state and the Nazi Holocaust. Or is it just me...

(Update: As Kellie points out in the comments below, and as I should have known, the cartoon explicitly references a WWI propaganda image, so maybe it was 'just me'...But deliberate or not, those other resonances were certainly there for me, and may have been for others, at however subliminal a level...)
Here's a short video by way of a response:

The children are copied directly from the World War I recruitment poster that Bell is referencing. Steve Holland wrote recently about the poster and the artist who drew it, Savile Lumley, at his blog Bear Alley.

Thanks for the reference, Kellie. I don't think it detracts from my own response to the cartoon, though. I was only vaguely aware of the WW1 inference, and of course the wall and barbed wire are Bell's. Like all images, the cartoon works on a number of levels and calls up different associations for different people....

Yes, for some reason while he included the children, he left out their playground with built-in rocket shelters. Nice eyeliner their papa uses.

Although I found the cartoon highly objectionable for the kinds of reasons Kellie has suggested, I didn't find it offensive - I didn't pick up any Nazi implications. However it's true that the papa here does look far more haunted than the father in the original cartoon (it's the eyeliner, no doubt), and our paradigm case for the haunted soldier certainly is the Nazi one. So maybe there are some subliminal associations here, but if so, they do seem fairly far from the surface.

Blog birthday congratulations from me too, it's always a pleasure to read MitM!

Thanks for your comments - I've added an update to the post accordingly....

Thanks too for your 'birthday' wishes.

Great piece at Normblog the other day, Eve.

Thanks Martin, glad you liked the piece - there's a reference to you in it, by the way, though not of course by name.