To Italy and back 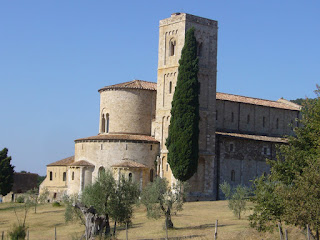 We arrived back from Italy on Sunday night, after two gloriously hot weeks renewing our acquaintance with our favourite valley in southern Tuscany. The highlights of our stay included sampling Brunello at an ancient vineyard outside Montalcino, and hearing white-cowled monks singing Gregorian chant at the beautiful Romanesque abbey of Sant'Antimo (see above).
Besides the excellent food and wine, the usual volume of holiday reading was consumed. After reading Arthur Herman's eye-opening book on the Scottish Enlightenment (which neatly brought together my interest in my Scottish family history and my fascination with the late 18th century) in St. Ives, I started off in Italy with David McCullough's 1776: Britain and America at War (who would have thought military history could be so gripping?), moved on to Iris Origo's autobiographical memoir (we visited her house and gardens during our stay), took an enjoyable diversion through Adam Gopnik's Paris to the Moon (every bit as witty and touching as his New York collection), then made a quick dash through Sarah Wise's The Italian Boy (in this case the link was with my early 19th century London ancestors), before launching into Doris Kearns Goodwin's monumental Team of Rivals: the Political Genius of Abraham Lincoln, in which I'm still absorbed. (It's an Obama favourite, of course. I notice, by the way, that he's taken another McCollough volume - on John Adams - to Martha's Vineyard. Fat chance he'll get to do any historical reading with his health care reforms being assailed from both left and right.)
Now it's back to work - and to blogging, once I've caught up with what I've been missing while I've been away.
Posted by Martin at 17:03