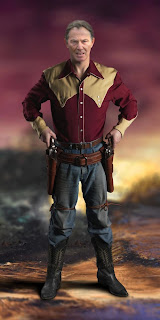 The caption alongside this image (entitled 'Shock and Awe') in yesterday's Sunday Times described it as an example of its creator Richard Hamilton's 'acute protest art'. Acute? Art? It's less subtle than Steve Bell on a bad day. There's no ambiguity, no originality, no nuance: just a trite encapsulation of a tired political stereotype. And yet this is the person whom Waldemar Januszczak praises in the accompanying article as 'the most important British artist currently at work'. Janusczak is positively giddy with excitement at the fact that, despite his age, Hamilton 'is an artist who cannot be tamed or brought into line':

Here he is, 88 years young, still turning down knighthoods and MBEs, still winding up 'The Man' at every opportunity he gets, still belting out the protests like a teenage agitator at a Trafalgar Square rally.

What a rebel. It won't surprise you that Januszczak is particularly thrilled about Hamilton's typically monochrome take on Middle East politics:

Given what he is saying here about the behaviour of Israel, don't be surprised if Mossad sends a squad of tennis players into Britain in the next few weeks to discuss Wimbledon with him. Which reminds me, where did I put my passport?

Gosh, Waldemar: having a go at Mossad, how daring. The truth is, whether his subject is Britain, Northern Ireland or the Middle East, Hamilton can never be accused of taking time to see both sides of the question, if a one-sided cartoon will grab a bigger headline, and appeal to posturing armchair rebels like Januszczak.

In another throwaway sentence, the art critic compares Hamilton's Blair picture with his early portrait of High Gaitskell, 'his fellow betrayer of Labour principles'. It's just another symptom of what Jeff Weintraub labels Blair Derangement Syndrome. As Jeff says, 'there are serious reasons why people might disagree with Blair's policies and his political style or even condemn them':

But in many cases these feelings about Blair go beyond serious moral and political criticism and slide over into the real of pervasive, all-consuming, obsessional, and even hysterical hostility.