Rhetoric and remembrance on the anniversary of 7/7 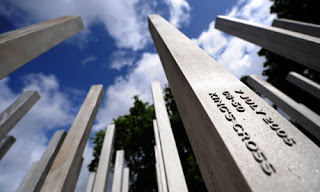 It's a shame that, in some quarters, the fifth anniversary of the terrorist massacre of 53 innocent London bus and train passengers has been marked, not by tributes to the dead, sympathy for the bereaved, or renewed condemnation of those who committed mass murder, but by the wearily familiar spectacle of commentators attempting to displace both sympathy and blame on to other targets.
Thus today's Guardian editorial (in which resident ex-Stalinist and apologist for sundry anti-western authoritarians and fundamentalists Seamus Milne surely had a hand), devotes almost all its energy to excoriating the Labour government, the police, the military, the USA, et al, for their response to Islamist terror of the kind that struck London in July 2005, with hardly a word about the cold-hearted perpetrators and nothing about their clerical-fascist backers in the Middle East and Asia.
Like The New Statesman with its notorious 'Blair's Bombs' headline five years ago, the once-liberal newspaper is sure that somehow it's all our own fault, even if it can't quite make up its mind why. Yesterday, it gave pride of place to a piece which argued that the attacks were 'blowback' for Britain's cosy relationship with militant Islamist groups 'stretching back decades', whereas today - by complete contrast - its editorial quotes approvingly the remarks of a police officer turned academic who blames the supposedly 'flawed, neo-conservative' direction of the response to the attacks for the continuing threat.
Even more confused is Liam Thompson's piece over at Left Foot Forward which argues against the 'dominant hegemony' (does he read the Guardian or Independent?) which indulges in 'the casual employment of such easy categorisations as 'terrorism', 'freedom' and 'radical Islam'.' For, you see, Thompson knows better, and he wants to enlighten us about the 'real lessons' of 7/7.
Thompson reminds us, in case we'd forgotten, that the 7/7 murderers were unified by many 'demographic factors' beyond their fanatical devotion to a hardline version of Islam: 'They were all young men, from minority communities whose experience of Britain was that of working class life in the North. This is far more important than their religious inclinations.' There follows a litany of the deprivation, poverty and 'alienation from the political process' in the communities that the bombers came from.
In his defence, Liam Thompson makes it clear that he believes there can never be any excuse for the 'horrific and barbaric actions' of the 7/7 murderers. But then he adds:

To focus on Islam though, and the dynamics of international politics is to ignore the more difficult questions. What drove some ordinary men from Yorkshire to declare Jihad on their own country? What fostered such intense anger and alienation, so easily exploited by extremists?

To ignore Islam, though - or rather, the militant, jihadist perversion of Islam - is to evade the obvious answer to these questions. Of course, extremism of all varieties thrives among those already disaffected from society for whatever reason, though the fact that there aren't too many examples of non-religious working-class young men, of whatever ethnicity, becoming suicide bombers, might have given Thompson pause for thought.
But we should know by now that extremist ideology - particularly if it has a mystical, irrational element - can itself be the cause of 'anger and alienation'. And since 9/11 we've known that this kind of fanatical irrationalism can attract educated, middle-class individuals - perhaps 'alienated' from their peers for other reasons - just as easily as working-class youth. To see the perpetrators of 7/7 simply as passively 'exploited' by others is to relieve them of their moral responsibility for the murderous acts which they planned and executed.
After all of this moral equivocation and displacement, reading Tony Blair's statement on the fifth anniversary of the July 7 bombings felt like coming up for air. Blair argues that the terrorists failed in their mission 'to wound the community cohesion which is central to what it means to live in modern Britain': 'Britain resolved, even more surely, to defeat the extremism and intolerance which drove the attackers and stand up for the values of freedom, democracy and the rule of law which as a nation we cherish'.
His statement concludes:

The attacks London faced five years ago were carried out by citizens of our own country but planned half a world away. As 9/11, Madrid and other terrorist attacks show, this is a worldwide challenge which demands a global response of vigilance, resolve and courage.
Today, Britain remembers the victims of 7/7 and of terrorism around the world. We thank the police, security and emergency services who work so hard to keep our country safe. And we acknowledge the courage and sacrifice of our armed forces called on to defend the values we hold dear against those who seek only to destroy them.

It's beyond my comprehension why so many people are still trying to excuse suicide bombers.

To the 7/7 bombers it didn't matter who or how many they killed, as long as they killed(even their own Muslim brothers and sisters).

Unrelated, if there's any chance you might make it into the capital, e-mail me I'll send you details about Saturday's drink at London Bridge bobfrombrockley at gmail com. Kellie Strom is signed up, among others.