No book burning - but no excuse for violence 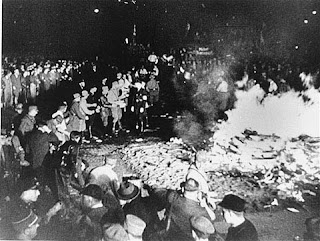 I don't believe that any books are 'sacred'. The Qu'ran, the Bible, the Book of Mormon, the Tibetan Book of the Dead - all are human products and should be treated as such. In a free society no book, whether secular or religious, should be protected from criticism, ridicule or even condemnation if necessary. But talk of burning books of any kind makes me nervous and summons up some pretty unpleasant historical memories (see above).
So I hope Pastor Terry Jones cancels his plan to burn copies of the Qu'ran on the anniversary of 9/11. He is perfectly within his constitutional rights to do so (something the Pakistani government doesn't seem to understand), but it would be wise of him to desist. It would provide one more excuse (as if they needed it) for Islamist militants to run riot and terrorise the innocent. You can imagine the scene in cities across the 'Muslim world', as the usual 'rage boys', to use Hitch's coining, 'spontaneously' congregate in front of the cameras, miraculously supplied with American flags to tear and burn (where's their respect for other people's sacred totems?).
But let's be clear. If Jones goes ahead with his mindless stunt, and innocent people get killed in Asia or the Middle East, those deaths won't be his 'fault.' The blame will lie entirely with the perpetrators and their warped ideology, which sees every slighting of their beliefs as justification for murder and mayhem. In their fundamentalism and intolerance, Pastor Jones and the Islamists are mirror images of each other.
Update: 11th September
Predictably, authoritarian and corrupt leaders in the Middle East and Asia have leapt on the protest bandwagon, to bolster their own support. It was astonishing, and a little absurd, that President Karzai of Afghanistan used his annual Eid message to condemn the actions of an insignificant and unrepresentative clergyman halfway across the world. And his claim that 'insulting the Koran is an insult to nations' was patently ridiculous and designed to stoke the dangerous fires of protest.
Meanwhile, the protesting crowds in Afghanistan and elsewhere are said to be outraged just by the 'idea' of burning their holy book, even if it doesn't actually transpire. Watching and reading the reports last night, I thought I detected a note of disappointment in the protestors' reaction to the news that Pastor Jones may not, after all, go ahead with his book burning.
Finally, on this of all mornings, it struck me that the saddest consequence of this whole affair (so far) is that, on the anniversary of the terror attacks on New York and Washington, it has focused attention on the twisted fundamentalist ideology that inspired those outrages, rather than on the thousands of innocent victims and those who still grieve for them.
Posted by Martin at 18:12