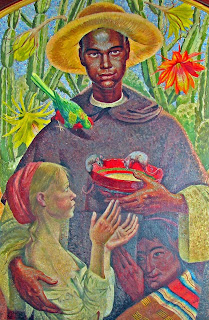 There's enough of the residual Catholic in me to note that today is the feast of St. Martin de Porres, one of the cooler saints in the calendar. The illegitimate son of a Spanish nobleman and an ex-slave, Juan Martin de Porres was born in Lima, Peru, in 1579, and spent his life in the service of the poor. He was the first black saint from the Americas and is the patron of people of 'mixed race'. (Celebrating him seems particularly pertinent under this disappointingly Eurocentric papacy, which has seen Benedict XVI appoint a disproportionate number of European cardinals to oversee a church 40% of whose members live in Latin America and 25% in Africa and Asia.)
As I've remarked before, were I ever to resolve my arguments with Christianity, St. Martin de Porres would be a prime candidate for my patron saint, though he'd have to battle it out with St. Martin of Tours, whom I admire for his early advocacy of the separation of church and state (after the execution of a group of heretics, he protested that the church was wrong to use the power of the secular state to enforce matters of belief).
An additional coolnesss factor attaching to St. Martin de Porres is the fact that, to my knowledge, he's the only saint to have had an album dedicated to him by a jazz legend: Black Christ of the Andes by the great Mary Lou Williams. Here's the opening track:
Posted by Martin at 12:04

I was named after Martin de Porres, and my mother and grandmother were regular subscribers to the eponymous magazine, published in Dublin. I think that it is still going strong.

Forget to mention it was the turn of the other St Martin (of Tours) yesterday (Thursday). Martinmas supposedly heralds a last burst of mild weather before autumn sets in. Wasn't much sign of that around here...Hope you're feeling better, by the way.

Mary Lou Williams, a superb pianist and arranger (noteably for Andy Kirk's Clouds of Joy) desrves to be better remebered. She was the first (and remains one of the few) women to get to the top in the macho world of jazz. But her religiosity in her later years is, imho, a great pity.

Thanks for the comment, Jim. I agree with what you say about Mary Lou and the tendency for her to be overlooked, mainly because of her gender. I'd also concede that her conversion didn't result in her best music. But you could argue that her 'religiosity', as you put it, rescued her from a personal crisis and gave meaning to the second half of her life. And it produced some admirable charitable work, if not great music....