The BBC’s Hugh Schofield wonders why French books – and especially modern French novels – don’t sell abroad. This is in spite of the fact that France has a thriving literary culture, and despite the popularity of books translated into English from other European languages, notably Spanish, Portuguese and Italian. The authors and readers interviewed by Schofield propose various reasons, ranging from the supposed elitism and intellectualism of French literary culture to the unexciting covers of French novels, and on the other side, the laziness and misconceptions of Anglophone publishers and readers.

I actually quite like French book covers, as well as French bookshops, which are described rather dismissively as ‘cramped and colourless’ in Schofield’s piece. Those unadorned cream covers, enlivened only by the author’s photograph, are surely what makes a book distinctively French - it wouldn’t look right to have a French novel that wasn’t in that familiar Flammarion, Gallimard or Livre de Poche style. I can see a number from where I’m sitting (see photo below), and they bring a breath of the Left Bank into the room. As for French bookshops, I’m rather fond of their uniform rows of identical-looking volumes and studiously highbrow demeanour – all very un-Waterstones, and long may it continue. 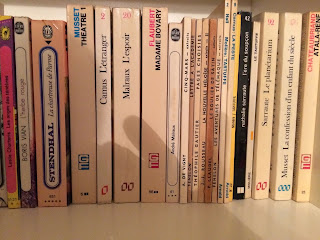 I wonder if the absence of modern French writing from British and American shelves has something to do with the fact that the small publisher Harvill (absorbed first into Harvill Secker and more recently into Random House), which was largely responsible in the post-war years for introducing English-speaking readers to contemporary European writers, had a bias towards other countries, such as Portugal, Russia, and the old Eastern bloc - or was it just that there happened to be a number of brilliant translators available from those nations? But then I've just remembered that Harvill published the detective stories of Daniel Pennac, so maybe I've got that wrong. (Perhaps my brother Michael, who used to work for Harvill, will read this and be able to help out here).

Whatever the explanation, Hugh Schofield is basically right in his assessment that a great deal of contemporary French literature remains untranslated into English. If a major Spanish author like Javier Marias or Javier Cercas brings out a new novel, you know it’ll only be a matter of time before an English translation appears, and that it will be enthusiastically picked up by the Sunday broadsheets, as well as by the LRB and New York Review of Books. But there’s rarely an equivalent process, or fuss, over a French literary success, apart from, as Schofield points out, the headline-grabbing Michel Houllebecq.

I confess to having a personal interest here, since I’ve developed a yearning to read a couple of recently-published French novels, and I’ve been frustrated at the absence of English translations. I discovered these books via one of my current favourite blogs – The Catholic English Teacher. I know it won’t appeal to my agnostic and atheist readers, but I think it’s one of the best literary blogs around - and I love the masthead. Despite the title, Roy Peachey, the blog’s author, is remarkably well-informed about a range of contemporary literatures in languages other than English, and especially in French. Having read his recommendations, I’m keen to track down L’art francais de la guerre by Alexis Jenni, which won the Prix Goncourt a couple of years ago, and also the work of Claire Daudin, who as well as being a prize-winning novelist is also an expert on Mauriac, Bernanos and Peguy. However, neither of these authors has yet had any of their writings translated into English.

There’s a particular pleasure in being able to read something, however brief – a short story, an article, a poem even – in the language in which it was written. But as it stands, my French isn’t quite up to it, despite the fact that I have an ‘A’ Level in the subject. You could see this as the fault of the British education system – a failure to teach languages so that people can actually use them – or a reflection of my own laziness and lack of linguistic flair. I did only get an ‘E’, after all. Mind you, I enjoyed sixth-form French: watching Mr Levine pacing back and forth, gesticulating expressively as he went into raptures over poetic passages from Zola.

As I mentioned in a recent post, I had a bit of a Mauriac phase around the time of our visit to Bordeaux last summer. As our driver, Marise, pointed out while transporting us from the station, Mauriac is one of the three local ‘M’s – the others being Montaigne and Montesquieu. My family mock my habit of having to read something by a local author wherever we go: it was Saramago in Lisbon, Hammett in San Francisco, etc.  On this occasion, I read Therese Desqueyroux before we left home, and Le Noeud de Viperes on the way back, both in English translations (sorry, can't seem to do the accents on Blogger).  However, on our return I was keen to read more by Mauriac and searched online for a collection of his post-war political articles - or Bloc-Notes. (Mauriac, a devout Catholic, was nevertheless a staunch opponent of the Franco regime in Spain and a supporter of the French Resistance.) But I discovered that these were only available in the original French, and reading them has been a bit of a struggle, to say the least. (Those books in the photo above? They all belong to my Other Half, who was a much better student of French literature than I ever was.)

And so I’ve gone back to basics. Since October I’ve been working my way through Hugo’s French in 3 Months, filling in the gaps created by failing memory. I’ve just reached the end, and after Christmas it’ll be on to the advanced course. Mind you, as I related last week, I made a similar resolution earlier this year with regard to Portuguese, and that fell by the wayside. And then there was the year I took a Pavese novel in the original Italian on holiday, but gave up after a couple of chapters. I love languages, and since childhood I’ve been deeply envious of those who were brought up to be bilingual, but I’m a bit of a magpie – I tend to know a little about a lot and don’t speak or read any single foreign language very well.  We’ll see how it goes.

So, when it comes to contemporary French literature, I’ll have to wait, either for my facility with the language to improve considerably, or for some enterprising small publisher (do they still exist?) to develop a line in translations of modern French novels. Either way, I think I’m going to have to be very patient.
Posted by Martin at 21:56