We arrived home today from a week's holiday in Miami Beach: of which more another time. Our return was marred by an irritating and momentarily terrifying diversion. A few hours out from Miami on Saturday night, the pilot announced there was a smell of smoke in the cabin and that we'd be diverting to Halifax, Nova Scotia. Our descent, through fog and driving rain, was distinctly hair-raising. At one point, there was a loud bang and flash of light, and we were convinced the plane had lost an engine. The next half an hour, until our bumpy landing at Halifax, was probably the most frightening of my life. It turned out the explosion had been lightning striking the aircraft: not as serious as we'd thought, but still distinctly disconcerting.
Our fear and relief soon turned to extreme weariness. After an hour waiting on the plane, we were 'de-planed' into a holding area for another hour or so, before being told that repairs would need to be done overnight, so we would be put up in local hotels. In the early hours of Sunday morning we were marched through Canadian immigration, then penned in the arrivals hall until buses could be found to transfer us to downtown hotels - another half hour's journey through driving rain, then queuing for a further hour and a half to check in. Finally, at about 7 local time yesterday morning, we fell into bed for a couple of hours fitful sleep. We woke to a damp, chilly Easter Sunday morning in Halifax, and to these views from our hotel window: 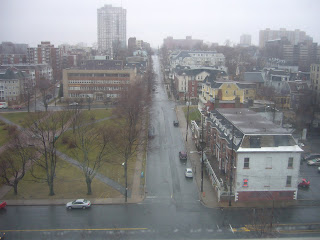 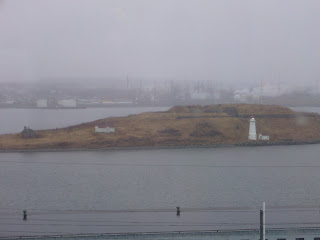 Without wishing to offend my Canadian readers, I'd have to say that Halifax is not a city I'd choose to visit, especially after a week in tropically hot Miami and en route home. We were hugely relieved to hear that our aircraft had been fixed and that we would be flying out on Sunday night, arriving back at Heathrow early on Monday morning. There was one last delay: a couple of inches of snow fell in Nova Scotia yesterday evening, and we spent a good hour on the tarmac, watching the ice being cleared from the plane's wings.
The worst thing about the diversion (leaving aside the temporary but very real fear of our imminent demise) is that it has all but erased the memory of our time in Miami. I'm hoping that a good night's sleep and then uploading my holiday photos to the computer will bring it all back - in which case, I'll tell you all about it in the next post.
Posted by Martin at 15:41

“A few hours out from Miami on Saturday night, the pilot announced there was a smell of smoke in the cabin and that we'd be diverting to Halifax, Nova Scotia. Our descent, through fog and driving rain, was distinctly hair-raising. At one point, there was a loud bang and flash of light, and we were convinced the plane had lost an engine.”

Sorry to hear you had such a hectic flight. I was on a flight from NYC to LA and the wing was hit by a bolt of lightning shortly after takeoff. My wife and I were scared as we thought the plane lost an engine. But these two ladies staring out the window just laughed and laughed. I think they were drunk.

I was also on a flight from Katmandu to Dubai (where I was transferring to another plane to Europe). About an hour into the flight the captain said we had to turn around and go back. No explanation as to why. When we landed, the plane was refueled. I think they forgot to fill it up before we took off. Of course I missed my connecting flight due to the delay. But the airline put me up for the night in Dubai and put me on an Emirates flight the next day. Emirates is a pretty nice airline. Only time I have ever had smoked salmon and the like in coach. I don't remember any beers/booze though.

Did you see my request for book recommendations about Cuba in the next post? I suppose I had you in mind when I wrote it (given the links on your blog), and hoped you might have some ideas (if you don't mind). Have you read Bardach's book?

Yeah, flying sucks. I am happy getting there (wherever I am going) and getting home. But the traveling part leaves a lot to be desired. I wish we had a better rail system over here.

Here are a few more books re: Afro-Cubans and slavery that I forgot to list on the other comment:

she is also the author of:

"Degrees of Freedom: Louisiana and Cuba after Slavery"

which I have not had a chance to read.

Once again - thanks! I appreciate you taking the time out of a busy schedule to do this.

Bardach recommends Hugh Thomas as the best general book on the revolution - do you agree? I once tried to reach Richard Gott's history, but it's unashamedly pro-Castro (as was his column in the Guardian here the other day). And on Castro, Bardach mentions Tad Szulc's 'Fidel: a critical portrait' - do you know it?

Most of the books on Cuba that I have read concern the nineteenth and early twentieth centuries.

A long time ago I read Sam Dolgoff’s “The Cuban Revolution: A Critical Perspective” which assesses the revolution from an anarcho-syndicalist/libertarian socialist perspective.

I hear Hugh Thomas’ work suffers from a paucity of Cuban primary sources and contains numerous factual errors. Have not read Szulc's text either. But I hear it is good.