Still feeling a bit jet-lagged after our extended journey home (see previous post), so in lieu of a coherent account, here are a few unconnected comments on our recent trip to Miami Beach:
On the outward journey I watched Frost/Nixon, which was much better than expected, overcoming my resistance to movie adaptations of stage plays - and anything to do with David Frost. Michael Sheen's impersonation of Frost was typically impressive, but it was overshadowed by Frank Langella's absorbing portrayal of the disgraced president. The climax of the movie, when Nixon comes as close as he ever did to admitting guilt, was both suspenseful and genuinely moving.
I also watched the first episode of Generation Kill, the new drama from the team behind The Wire, which tells the story of a US marine company in Iraq through the eyes of an embedded reporter. If anything, it was even more enthralling than the Baltimore cop drama. Given the length of time it's taken the latter to reach British terrestrial TV, it looks like I'll have to make Generation Kill my next DVD boxed set purchase.
And so to Miami Beach, where the temperature hovered between 80 and 90 Fahrenheit for most of our stay: on the odd day it dipped down to the 70s, locals complained about the cold. This was definitely a week for relaxation rather than sightseeing, but we made sure we took in the main attractions of South Beach. The guide books will tell you that Lincoln Road Mall is now the place to see and be seen, and that Ocean Drive is tacky and only for the tourists. But although we frequented the Italian restaurants of Lincoln Road most evenings, and enjoyed late afternoon walks to Books & Books and the Ghirardelli chocolate shop, we also brought away fond memories of strolls along the beach-side walkway (where we saw part of the triathlon in progress on a humid Sunday morning) to view the Art Deco frontages of Ocean Drive.
Certainly the southern end of the strip is rather touristy - you're likely to be besieged on the sidewalk by waiters brandishing menus and claiming to offer the cheapest breakfast in town. But the top end of the road is somewhat 'tonier' (as they say over there), particularly early in the morning before the crowds arrive: 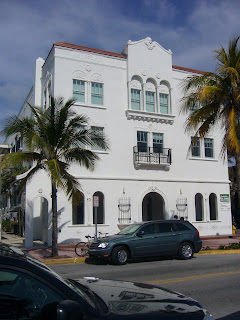 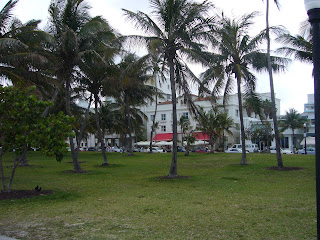 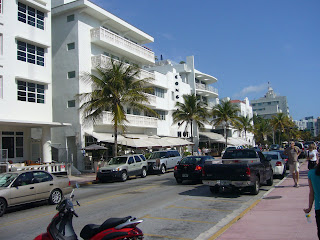 While we were in Miami I read Ann Louise Bardach's Cuba Confidential, which views the relationship between the US and Cuba through the prism of the Miami exile community, with a focus on the Elian Gonzalez affair, seeing the tragic history of the past fifty years as a tale of broken family relationships. It's a gripping account, packed with revelations about everyday life in Cuba, Cold War skullduggery and the vitiating influence of exile groups on American national politics (among others, the Bush clan and Joe Lieberman come out of it rather badly). As with all good books, I was left wanting to find out more: recommendations for books on Cuba - ones that don't glorify either Castro or American Cold War policy - would be very welcome.
One of the joys of holidaying in America, for obsessive followers of US politics like ourselves, is being able to watch uninterupted cable news, rather than brief video extracts via the internet as we do at home (yes, it's sad, I know). Our hotel room TV stayed tuned to MSNBC most days: we woke every day to Morning Joe, and on getting back in the evening sat down to great dollops of Hardball, Keith Olbermann and Rachel Maddow: sheer luxury (we were less keen on the brand new Ed Schulz Show, a liberal mirror image of Fox News / Limbaugh-style ranting). One of the myths about the States perpetuated in Britain and Europe is that its media coverage of politics is superficial and sensational, compared to the supposed old-world gravitas of our own. As with many myths about America, almost the opposite is true. While the shows mentioned above have popular and accessible formats, they give political issues much greater time, seriousness and analysis than most programmes on British TV and radio, and their presenters and guest commentators display a greater knowledge of - and genuine belief in - the political process than many of ours.
Finally, South Beach is supposed to be a top location for celebrity sightings, but I think most of them had fled before the avalanche of spring break crowds. Our only confirmed sighting was of stand-up comic turned TV presenter Steve Harvey, apparently in town for a book signing - though our Argentinian-born taxi driver claimed that the previous week he'd transported Sharon Osbourne and 'that Mr. Piers' to the local auditions for America's Got Talent.
Posted by Martin at 07:47

"recommendations for books on Cuba - ones that don't glorify either Castro or American Cold War policy - would be very welcome."

Jean Stubbs "Tobacco on the Periphery" which is a social and economic history of Cuban tobacco.

Louis Perez has written a lot. Here are a few selections:

"Cuba: Between Reform and Revolution"

"The War of 1898: The United States and Cuba in History and Historiography "

"Cuba in the American Imagination: Metaphor and the Imperial Ethos"

"Cuba and the United States: Ties of Singular Intimacy"

"List seven songs you are into right now. No matter what the genre, whether they have words, or even if they’re not any good, but they must be songs you’re really enjoying now, shaping your spring. Post these instructions in your blog along with your 7 songs. Then tag 7 other people to see what they’re listening to."

I flew across the Atlantic recently, and also had Frost/Nixon as part of my "entertainment". Same response as you. I also watched the new Bond, which I thought was dreadful, and The Secret Life of Bees, which I have to confess made me cry (I am a sucker for sentimentality).

Most of the Generation Kill reviews I've seen have been pretty negative. It seems if you do something that everyone likes (The Wire), it becomes de rigeur to say the next thing you do is shit.

Well, I thought the first episode was pretty good, anyway - who knows if they manage to sustain it across a whole series? Like The Wire, it's not easy viewing, but I found it quite compelling - will post a proper review when I've seen more.