Yesterday we were in London to see the new production of 'Waiting for Godot' at the Theatre Royal, Haymarket. Some reviewers have suggested that by emphasising the comic aspects of the play, and by making the two main characters more explicitly into old entertainers, director Sean Mathias has somehow undermined its serious, philosophical content. Don't believe it. This is certainly a hugely enjoyable production, but if anything the rich comedy deepens the existential drama.

Then there's the treat of watching some of our finest actors at their peak. Even the smallest part, that of the mostly-mute slave Lucky, is taken by veteran character actor Ronald Pickup, whose nonsensical 'thinking' speech is an almost unbearably intense tour de force. I love Simon Callow and I'm always pleased to see him on the cast list: his Pozzo was certainly a compelling, larger-than-life monster, but it was just a bit too Simon Callow-ish for me, if you know what I mean. By contrast, Patrick Stewart's Vladimir and Ian McKellen's Estragon were completely fresh and newly-imagined characters. McKellen especially was almost unrecognisable as the forgetful, put-upon old tramp 'Gogo', and his performance, in particular, made me realise that, as much as anything, this is a play about ageing.
However, ascribing 'meaning' to Beckett's many-layered masterpiece is probably a pointless exercise. I was struck by a comparison that hadn't occurred to me before, but which I'll probably discover others have written about. Last week, thanks to a post over at 'On A Raised Beach', I found myself watching part of Jonathan Miller's 1966 TV strangely wonderful production of 'Alice in Wonderland' on Youtube. Watching Callow and Pickup yesterday, it occurred to me that Pozzo and Lucky resemble some of the outlandish characters encountered by Alice, and that to ask what they 'represent' is as pointless as asking what is signified by the Cheshire Cat, or the hookah-smoking Caterpillar. At a deep level we 'get' their meaning, and any attempt to put it into words risks simplifying it.
Beckett's play is the same kind of philosophical fantasy, brimming with profound existential and spiritual portent (and whatever the man himself said, the religious undertow of 'Godot' is inescapable), but it's also, like 'Alice', a mad, metaphorical entertainment. It's Mathias' achievement, and that of his stellar cast, that the rich comedy of this production draws us towards its dark, serious heart, and not away from it, so that its many layers of meaning linger in our thoughts and our dreams long after we have left the theatre.
H. and I reflected that, incredibly, it's been about 27 years since we last saw a production of 'Waiting for Godot': it was back in the early '80s that we saw Trevor Peacock and Max Wall take the leading roles at the Royal Exchange in Manchester. No wonder I was sensitive to the ageing theme yesterday. To think of the Royal Exchange in those days is to conjure up at once the distinctive spicy, wholefood-y smell of the theatre bar, to remember queuing in the early morning for banquette tickets in the 'lunar module', then retiring to the Danish Food Centre for coffee, all the whole thinking that we really must get back to the John Rylands Library and do some work on our unwritten theses...
Yesterday, the price for dragging our two sceptical teenage offspring to a play in which 'nothing happens', was a spot of West End shopping, including an hour spent mingling with the beautiful people at Abercrombie and Fitch. What can you say about a shop that has no sign outside, yet has customers queuing around the block before it opens, is so poorly lit that you can't be sure of the colours of the clothes you're buying, and employs staff just to dance and to pose stripped to the waist in the entrance lobby, not to mention having a queue to pay that snakes half-way round the shop? Having said all that, the beautiful and well-toned young assistants are always charming and helpful, even to fifty-something parents who feel embarrasingly out of place (as I say, I was feeling old yesterday). But you can't help longing for the day, surely not far away, when A&F loses its exclusive image (in the US, there's now one in almost every city mall, but the London branch is the only one in the UK) and has to do a bit more for the comfort and ease of its customers.
Oh, and to get to London we had to stand like cattle, crammed into a train carriage with Stevenage supporters, some of them already cracking open the Stella, on their way to Wembley for the FA Trophy final (I think they won). But it was worth it.
Footnote
I quite liked this Garland cartoon in the Telegraph last week (in case you're wondering: no, I haven't changed my political colours - my Tory-voting in-laws read it): 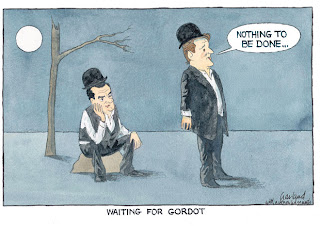