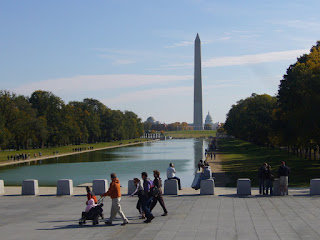 We arrived back early on Thursday morning from our trip to Washington DC. On the flight over last Saturday, I watched two films with a DC setting, one silly and tedious - Night at the Museum 2 - and one more serious and engaging - State of Play, with its coy references to All the President's Men (the bad guys had an office in the Watergate building, and there was a key scene in an underground car park).
We touched down at a wet Dulles International Airport on Saturday afternoon, then had a half hour ride through the autumnal north Virginia countryside to our hotel in Georgetown, arriving via the Thomas Jefferson Bridge and getting our first, simultaneous glimpses of the Washington Monument and Lincoln Memorial to the right, and the Watergate and Kennedy Center to our left. On Saturday night we ate at Papa Razzi, a cavernous and popular Italian restaurant on Wisconsin Avenue, almost nodding off over the pasta, as we tried to forget that, as far as our bodies were concerned, it was three o'oclock the next morning.
On a beautifully clear Sunday morning we woke to the sound of the first runners in the Marine Corps Marathon being cheered past our window. After breakfast we plunged into the crowds lining Wisconsin Avenue, enjoying the sounds of local band the Melonheads who were playing alongside the route. 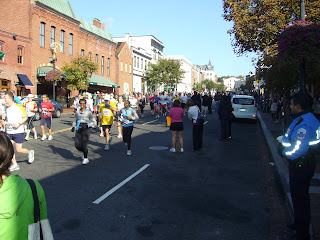 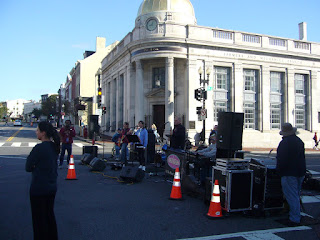 Most of the main roads were closed, so we had to walk into downtown DC. We eventually caught up with the marathon as it snaked around the National Mall, and had to fight our away across the onrush of runners in order to get to the great white birthday cake of the Lincoln Memorial. 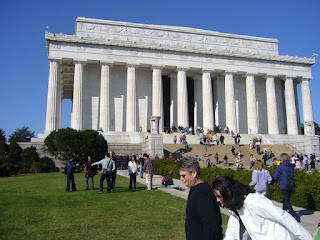 It was a perfect morning for sightseeing, with a clear blue sky, bright sunshine and the leaves of the trees a riot of reds and yellows, as we sat on the steps and thought of the crowds that gathered here for momentous moments in recent history, such as King's speech and the Obama inauguration. In short order we then took in the stark, simple Vietnam memorial, where we saw people 'brass rubbing' their relatives' names, the World War 2 memorial, and the Washington Monument, before a long walk around the Tidal Basin to the Jefferson Memorial.
In the afternoon we walked up 14th street, past government buildings, for a break in the Borders cafe (where the free Wi-Fi enabled our teenage offspring to tweet from their iPods), before our first encounter with the White House. We failed to catch a glimpse of the first family from the north side, and realised when we went around to the South Lawn, and were allowed to get up close to the fence, that the slightly relaxed security arrangements probably meant they weren't at home. But we did catch a glimpse of Michelle's vegetable garden. Somehow we had enough energy left, after this long day of sightseeing, to walk back up Pennsylvania Avenue to Georgetown, for a spot of shopping on 'M' Street.
Posted by Martin at 07:16

welcome back! I remember the first time I saw the Vietnam memorial--a tear came to my eye not from the relatives, but from the children's letters and baseballs, and boots, left as birthday tributes by families who never forgot those they loved.

And, well, lucky you being able to walk--I had to jaywalk from the Lincoln memorial to Arlington last time I was there. It's odd how Roman DC is, isn't it?

Anyway, all the best, Martin

Yes, the Vietnam memorial is extremely moving, isn't it? Partly it's the respectful silence that falls on everyone as they approach, partly it's the photos and mementoes of lost relatives, as you say, and partly it's the design, the crescendo of names in the middle seeming to reflect the increasing death toll as the war rolled on...

I wish we'd been able to get over to Arlington - jaywalking or otherwise - but it poured with rain the day we planned to go - as I'll describe in a future post.

As for DC being Roman...absolutely...or Greek - I think the Parthenon was one of the models for the Capitol...it does give everything a rather uniform (if awe-inspiring) aspect - our daughter kept thinking every new building was the White House.

I think one of my favorite things to do when I was in DC was to go to Arlington (not far) and see the presentation at the tomb of the unknown soldier. So moving!

More places to go sightseeing are at http://www.sightseeingreview.com