If you’d been in the San Francisco Bay Area last month, you might have been tempted to drop in on this event: 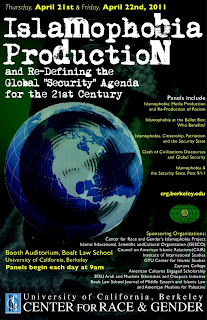 Or maybe not. A closer look at the conference programme would have given you pause. The event seems to have drawn its inspiration from a Huffington Post article by one M. J. Rosenberg, which ‘summed-up possibly for the first time and in clear fashion the primary motivations behind the increasing intensity of the Islamophobes’ campaign’. The programme note goes on:

Rosenberg's analysis makes a connection between domestic Islamophobia production and dissemination in the US and foreign policy objectives related to the Muslim world, which centers on fomenting hate and bigotry at home so as to create the needed condition for continued support of militarism and endless war abroad.

The organisers then make the following claim:

In response to these developments, ‘the conference will seek to document the ideological, institutional and financial interests entangled in the production and dissemination of Islamophobic contents in the US and in Europe and exploring the primary desired outcomes, in the short and long terms.’


In other words, if it was an open-minded, diverse, academic exploration of the causes of anti-Muslim prejudice you were looking for – then think again. The organisers of this event had clearly made up their minds in advance, and their programme reads like a political manifesto rather than an academic prospectus. You can just tell there wouldn’t have been much point attending if, for example, you thought it was something of an overstatement to claim that the airwaves are 'filled with Islamophobic content' or if, whatever your opinion of the wars in Iraq and Afghanistan, you believed they were motivated by something other than hatred of Muslims. Or if you suspected that the very notion of ‘Islamophobia’ might have been dreamed up (‘produced’, to use the conference’s preferred jargon), or at the very least exploited, by fundamentalists seeking to constrain criticism of their beliefs.
Then again, your interest in attending this event might have been somewhat undermined by reading that ‘the conference will bring together researchers, academics, community advocates and representatives of the Organization of Islamic Conference’. Even if you knew nothing about the latter group, a quick Google search would have thrown up some rather worrying information: such as that its political headquarters is in Tehran, that a virulently antisemitic speech at one of its conferences received a standing ovation, and that this was the outfit that tried to persuade the UN to introduce a ‘defamation of religion’ law that would have effectively outlawed criticism of Islam. You might begin to wonder what a responsible academic institution, let alone one one with a 'liberal' reputation, was doing collaborating with an organisation of this nature.
And finally, you might question why a ‘Centre for Race and Gender’ was devoting its resources to an 'Islamophobia project' in the first place. Surely a more urgent priority would be to analyse the racism (antisemitism, repression of ethnic and religious minorities) and sexism (honour killings, forced marriage,  absence of civil rights for women) perpetrated in the name of Islam - which are arguably both more widespread and more deadly than the prejudices of supposed 'Islamophobes'?
All in all, this absurd conference is a striking illustration of a number of things that are wrong with the postmodern academic 'left'.  Firstly, there’s the ingrained habit of responding to any new development that doesn't fit its existing narrative - in this case, the growth of radical Islam - by looking studiously in the opposite direction. Secondly, and related to this, is the tendency to trace the blame for any problem in the world to the sins of the West, and the United States in particular: so it's our racism that's the cause of all these wars, not their terrorism. And thirdly, there's the temptation to see any anti-western movement - in this case the blatantly patriarchal, anti-free-speech OIC - as objectively progressive - as, in postmodern feminist Judith Butler's notorious phrase about Hamas and Hezbollah, 'part of the global left'.
Alan Johnson analysed this pseudo-leftist cast of mind earlier this week, in a post over at the World Affairs site:

After 1989, and especially after 9/11 and the wars in Iraq and Afghanistan, the old idea that Stalinism (its crimes notwithstanding) was objectively progressive against the West, morphed into the idea that all opposition to 'US imperialism' or 'Empire' was a 'resistance' or 'multitude' that must be (its crimes notwithstanding) supported, or at least not opposed energetically.

This pro-tyrant left thinks it holds the key to the entire world in the palm of its hand. If America is opposed to a tyrant, then—there is some dubious logic here, but this really is the crucial move—the tyrant must be opposing America. And—this is the last stretch, stay with me—therefore the tyrant is an 'anti-imperialist' and, objectively, 'progressive.'

The programme for the 'Islamophobia Production' conference' ends with this promise: 'The papers presented at the conference will be published in UC Berkeley’s Islamophobia Studies Journal inaugural edition Fall, 2011'. I can hardly wait. That a respectable university even publishes something called 'Islamophobia Studies' (do you think they have a parallel 'Islamist Studies' journal?) is yet anther symptom of the sorry decadence of the academic 'post-left'.

(H/T Martin Kramer via Facebook)
Posted by Martin at 10:13

"This pro-tyrant left thinks it holds the key to the entire world in the palm of its hand. If America is opposed to a tyrant, then—there is some dubious logic here, but this really is the crucial move—the tyrant must be opposing America. And—this is the last stretch, stay with me—therefore the tyrant is an 'anti-imperialist' and, objectively, 'progressive.'"

Yup. My enemy's enemy is my friend. That old chestnut.