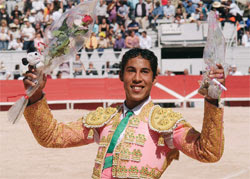 Yesterday's Observer sports magazine had an article by Jason Burke about the latest young bullfighting sensation:

Mehdi Savalli is French, an Arab and just 20. He defies bullfighting tradition and the purists object to his theatrical style yet he is already a sensation of the ring.

Apparently Savalli has become known as 'The Muslim Matador', which is also the title of Burke's piece. Trouble is:

...as I discovered when we met, Savalli is neither Muslim nor Arab. His mother is of Moroccan origin, although Savalli has never been to her homeland, and his father is of Sicilian descent. As for being a Muslim, he says: 'They just pigeonholed me. I eat pork, I don't pray and, if it wasn't for the training, I would drink. I am not the Muslim matador. I am a French matador.'

A salutary reminder of the dangers of assigning individuals (particularly members of minorities) to singular-identity slots - especially religious ones. Recent years have seen members of western Europe's populations of Arab, North African and South Asian heritage increasingly redefined according to their religious affiliations - particularly if that affiliation is Islamic - even if they are not particularly religious, or if other identities (national, ethnic, political, professional) are more significant for them. To be fair, this is partly a reflection of shifts within minority communities themselves - I remember Salman Rushdie regretting the diminution of the power of non-sectarian trades unions and political organisations among British Asians, as the mosques gained in influence and redefined communities along confessional lines - and the campaign against Rushdie himself was crucial in bolstering a new sense of (victimised, radicalised) 'Muslim identity' in the UK and elsewhere.

But the white majority, led by their governments and the media, have certainly done their bit to reinforce these singular, sectarian identities. There's now a tendency for media reports to describe individuals from Asian backgrounds primarily in terms of their nominal religion - especially if that religion is Islam and even if the individual is not particularly religious. And government funding, especially in the wake of 9/11 and 7/7, has often been targeted at 'Muslim' (rather than, as previously, 'Asian', or 'inner-city') communities.

I was thinking about this when I read Graham's post at Harry's Place in which he reports a speech by Professor Yehuda Bauer, on strategies for countering radical Islam. Although Bauer believes that the battle must be fought primarily within Islam, he believes that non-muslims can play a part by reaching out to ordinary, moderate Muslims. That's all well and good, but I would add that 'non-muslims' can also play a part by 'reaching out' to people not solely as Muslims, acknowledging other aspects of people's identities, and also acknowledging that religion may be of little or no importance in the identities of many people who get labelled as 'Muslims', just as it is for many whose birth certificate has them down as 'Christians'.

This links to another news item in the last couple of days (sorry, can't locate it just now), about yet another effort by the UK government to encourage the recruitment of 'moderate' imams to British mosques. Once again, all fine and dandy, as long as it's accompanied by efforts to support the work of secular, non-sectarian groups working within black and minority ethnic communities, and other communities for that matter.

Along similar lines, see this post by Andrew Sullivan.
Posted by Martin at 15:53