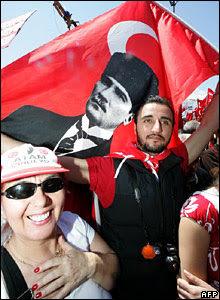 This looks encouraging.
According to the BBC, today 'hundreds of thousands of people have marched in Istanbul in defence of Turkey's secular system of government.' Apparently there's concern that if Abdullah Gul, the candidate of the Islamist-rooted Justice and Development (AK) Party, is elected president in coming elections he will not be loyal to Turkey's secular constitution, despite his protestations to the contrary. Some analysts believe his wife would be the first First Lady to wear a headscarf, 'a deeply divisive statement in Turkey'.
The BBC report adds this:
'Turkey is secular and will remain secular,' shouted demonstrators from all over the country as they waved flags and pictures of Mustafa Kemal Ataturk, the founder of the Turkish Republic. 'We want neither Sharia, nor a coup, but a fully democratic Turkey,' they added.
It's usually those who have direct experience of theocratic rule, or are faced with the imminent threat of it, who are most vehement in the defence of the principles of secularism. They're only too aware, from looking around at neighbouring countries, of the dangers of compromising the separation of religion and the state.
I wonder if those who complain about the apparent advance of secularism in western countries would find this kind of protest too 'dogmatic' or 'aggressive'?
Posted by Martin at 20:46