He's forty. She's eleven. And they are a couple.

This is the UNICEF Photo of the Year: 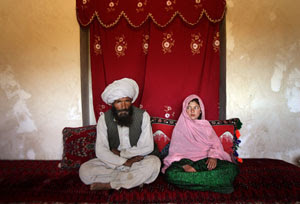 And this is the caption:

He’s forty, she’s eleven. And they are a couple – the Afghan man Mohammed F.* and the child Ghulam H.*. “We needed the money”, Ghulam’s parents said. Faiz claims he is going to send her to school. But the women of Damarda village in Afghanistan’s Ghor province know better: “Our men don’t want educated women.” They predict that Ghulam will be married within a few weeks after her engagement in 2006, so as to bear children for Faiz.

The picture, by American photographer Stephanie Sinclair, makes an eloquent statement - perhaps more powerful than any number of wordy articles - about women's rights, children's rights, and the ways in which they continue to be traduced in many conservative religious cultures. According to UNICEF:

During her stay in Afghanistan, it consistently struck American photographer Stephanie Sinclair how many young girls are married to much older men. She decided to raise awareness about this topic with her pictures. Particularly as the official minimum age for brides in Afghanistan is sixteen and it is therefore illegal to marry children.

Early marriages are not only a problem in Afghanistan: worldwide there are about 51 million girls aged between 15 and 19 years who are forced into marriage. The youngest brides live in the Indian state of Rajasthan, where 15% of all wives are not even 10 years old when they are married. Child marriages are a reaction to extreme poverty and mainly take place in Asian and African regions where poor families see their daughters as a burden and as second-class citizens. Already in their younger years, girls are given into the “care” of a husband, a tradition that often leads to exploitation. Many girls become victims of domestic violence. In an Egyptian survey, about one-third of the interviewed child brides stated that they were beaten by their husbands. The young brides are under pressure to prove their fertility as soon as possible. But the risk for girls between the ages of 10 and 14 not to survive pregnancy is five times higher than for adult women. Every year, about 150,000 pregnant teenagers die due to complications – in particular due to a lack of medical care, let alone sex education.

Yes, of course, poverty helps to create the contexts in which child marriages persist, but the influence of powerful religious discourses, in which women are regarded as inferior beings, should not be overlooked. Still, it's good to see UNICEF making this bold choice for its photo of the year and not being held back by fear of offending particular religious or cultural groups (though I'm curious as to why I couldn't find any reference to the award on their main English-language website: when I googled this I was directed to their German site). Women's rights, children's rights, human rights - are universal and indivisible.

It's a deserving choice - and a heartbreaking image. You can see more examples of Sinclair's work on this topic here.

AWN is a non-partisan Network of women and women’s NGOs working to empower Afghan women and ensure their equal participation in Afghan society. The members of the Network also recognize the value and role of children as the future of Afghanistan and, as such, regard the empowerment and protection of children as fundamental to their work.

Where will all the women’s rights groups be on this? Something tells me most will be selectively silent.