Barack Obama has won the Democratic primary in Iowa, beating Hillary Clinton into third place. It's a small beginning, and there's a long way to go before he can secure the nomination, but nevertheless it's an important victory. Andrew Sullivan effuses about Obama's victory speech:

Simply put: he sounded like a president. The theme was not just change; it was a new unity. And as a black man, he helps heal the past as well as forge the future. This really was history tonight. To win so many white voices, and bring together so many minorities, and use the unifying language that leaves the toxins of race and partisanship behind: This was the moment America stopped being afraid.

This was the America we have missed and have found again.

George Stephanopoulos is reminded of Clinton in '92: 'It is all about you the people, doing what you want and giving you the lead and getting your priorities noticed.'

For me, having recently watched the DVD of Primary, Robert Drew's pioneering documentary about the 1960 Wisconsin primary battle between JFK and Hubert Humphrey, other comparisons came to mind. The similarities between these two midwestern contests, one on the cusp of the '60s, the other in the first decade of a new century, were striking: in both cases, a relatively young and charismatic newcomer was up against a candidate representing experience and continuity, and in both cases it was the former who excited and attracted new, younger voters to re-engage with the political process.

I don't think it's just the retro furnishings in this photo of Obama's campaign bus that prompt such comparisons: 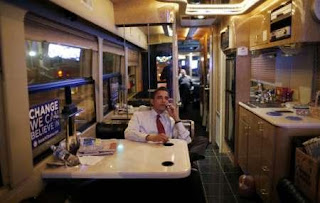