Reasons to be cheerful

Part 1:
Obama wins South Carolina by a wider than expected margin, giving his campaign a much-needed burst of momentum. 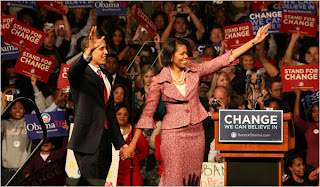 Part 2:
Obama gives his best speech so far, tackling head-on the accusations levelled against him by his opponents.

Part 3:
JFK's daughter Caroline writes this moving endorsement of Barack in the New York Times, concluding:
I have never had a president who inspired me the way people tell me that my father inspired them. But for the first time, I believe I have found the man who could be that president - not just for me, but for a new generation of Americans.
Update: Monday 28th January
And he's a West Ham fan! It just keeps getting better...
Posted by Martin at 19:48