We arrived home on Thursday from our half-term trip to San Francisco. In the next few posts I'll be reporting on our visit, during which your humble blogger not only saw the sights of one of America's great cities, but also listened to some of the country's top political commentators discussing the presidential election, mingled with guests assembling for a Hollywood premiere, and had a close encounter with the Speaker of the House.
We arrived on an unseasonably hot Saturday afternoon, exhausted from the ten-hour flight, but somehow with enough energy to make an initial foray down Powell Street, accompanied by the hum and clang of cable cars, to the humid bustle of Union Square. 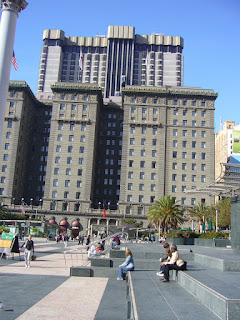 First impressions, as we sat beneath the looming towers of the Westin St. Francis Hotel (made famous by Dashiel Hammett), surrounded by Macy's, Saks Fifth Avenue and Tiffany's: a bit like New York City, but with palm trees. That evening we had our first meal in the city, joining the Saturday night downtown crowd at the deservedly popular Scala's Bistro on Powell Street.
Still on UK time, we woke early on Sunday and strolled through the deserted Financial District to the waterside, where the organic food shops and restaurants in the Ferry Building were just opening up, and the Pacific Ocean was becalmed as we looked out towards the Bay Bridge. 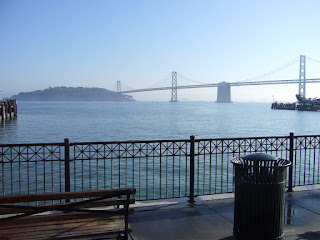 Then we dodged the joggers on the sidewalk, not to mention a biker rally thundering by, as we continued round to the tacky tourist hub of Fisherman's Wharf, where preparations were in train for a pre-Halloween pumpkin festival. Unable to face any of the kitsch eating-places here, we turned inland towards Washington Square. Our plan was to have brunch at Mama's, which had been recommended by a friend, but we were too impatient and too hungry to put up with the long queues outside, so instead tried Cafe Divine on the opposite corner of the square. It turned out to be an excellent choice: I loved the food, the informal ambience, the chance to watch the slow, Sunday morning traffic of North Beach drifting by. 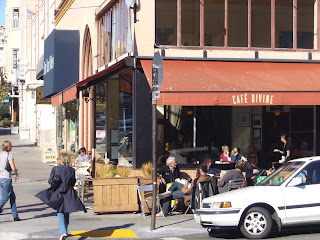 From Washington Square we walked along Columbus Avenue, North Beach's main drag, looking in on the National Shrine of St Francis and its recent addition,  an exact re-creation of the Porziuncula in Assisi, before crossing at the intersection to visit the City Lights bookstore. Although it was quite something to find ourselves in the spiritual home of the Beats, and the poetry section was predictably well-stocked, there was far too much Chomsky and Parenti and way too many 9/11 conspiracy theory books on the politics shelves (which pointedly made no concessions to the current election) for my liking.
The Italian restaurants and lamp posts painted in the colours of the Italian flag soon gave way to the hanging lanterns and red banners of Chinatown, as we walked up Grant Avenue in the direction of our hotel. The two neighbourhoods came together in a funeral procession that passed by: an Italianate band from a North Beach mortuary led a hearse topped by a portrait of a deceased resident of Chinese origin. The diversity of San Francisco is one of the most striking things about the city: not only the ethnic diversity, but also the stark differences between neighbourhoods (Italian/Chinese, affluent/poor, fashionable/seedy) and the way they often merge quite suddenly into each other.
In the words of Herb Caen: 'It's the indescribable conglomeration of beauty and ugliness that makes San Francisco a poem without meter, a symphony without harmony, a painting without reason - a city without an equal'.
Posted by Martin at 18:17

"there was far too much Chomsky and Parenti..."

Lawrence Ferlenghetti (sp?) who owns the shop is a good friend of Michael Parenti and City Lights Press publishes a lot of Parenti's books. I think they publish most of his books, actually.

Have you read anything by his son, Christian? Much, much, better.

I didn't know about the Ferlinghetti/Parenti link. Haven't read anything by Parenti junior, but will follow up. I have to say - although I'm attracted by SF's history of labour struggles, gay rights, etc, I found a lot of evidence of rather unattractive contemporary leftist rejectionism on show on our visit - not just the City Lights book selection, but the flyers condeming Pelosi and the Democrats as part of the establishment, etc. I love the city's laid back ambience, but if I lived there I think I'd tire of the reflexive leftism/oppositionalism in the air - or maybe that's unfair/unrepresentative ?

Here is a place to read some of Christian's stuff:

Most of the left in SF is wealthy liberal i.e. Democratic. It is a very expensive place to live.

The broader bay area (Santa Cruz, Oakland, Berkeley, etc.) definitely has it's share of loony left organizations from anarchist to communist but these groups are small and don't do much besides protest and publish crappy papers.

IMHO Berkeley and Santa Cruz are the worst in this regard.