On Monday, our second full day in San Francisco, we were determined to get a glimpse of the Golden Gate Bridge. The morning fog hung over the tops of buildings as we made our way up Nob Hill, past the city's smartest hotels and past Grace Cathedral, a vast, perfect replica of a medieval Gothic cathedral (as with the fake Porziuncula, my reaction was: impressive, but why bother?). We then turned into Hyde Street, which runs north all the way to the waterfront. The route was more up and down than we had bargained for, but it was interesting to walk through laid-back Russian Hill, and to pass by the zig-zag bends of Lombard Street. 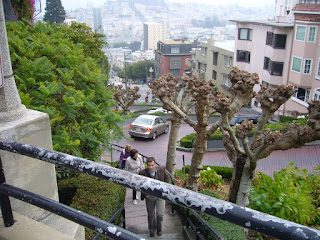 It was still misty and cool when we reached Ghirardelli Square, a former chocolate factory turned into an upscale shopping centre, where we stopped for coffee. We then traced a route westward around Fort Mason until we came to the Marina district, from which we got our first views of the bridge, its rust-red towers shimmering in the pale blue sky, as the fog finally cleared away. 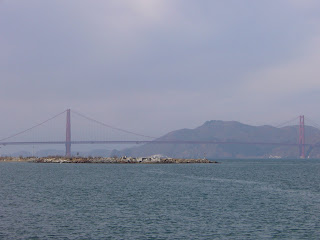 It being a working day, the area was quiet, with just the odd dog walker and guy with a fishing rod on the waterside path. Seeing us struggling with the map, a local cyclist stopped and pointed out the way to the nearest shops and restaurants. So we turned inland, gawping at the exclusive residences lining the streets back from the marina, until we hit Chestnut Street, with its attractive mix of affluence and edginess: this neighbourhood shopping street has its own Apple Store and two branches of Gap, not to mention a glut of trendy eateries. Purely by chance, we hit on the Grove cafe for lunch, and once again found we had made the right choice.
Rather recklessly, we decided to walk back through Pacific Heights, climbing the precipitously steep hill of Filmore Street as far as the intersection with California Street, then up and down all the way back to Nob Hill and onward to our hotel. The effort was worth it: on the way, we passed some attractive examples of San Francisco Victoriana, many of them extravagantly decked out for Halloween. Many of these buildings would have made an ideal location for a horror movie about the deserted house at the end of the street. 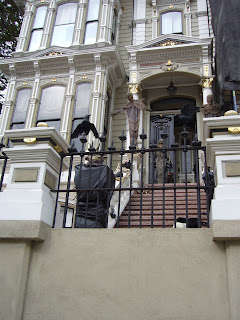 We returned early to our hotel, to prepare ourselves for the evening's excursion to the Commonwealth Club of California: about which more in the next post.
Posted by Martin at 15:48