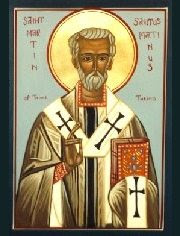 Today is St. Martin's Day, the feast of St. Martin of Tours, soldier, friend to the poor and, as I mentioned in this post, an early advocate of the separation of church and state.
The feast of 'Sintmaarten' is a big deal in the Netherlands, apparently.In Portugal, according to Sarah at Cafe Turco, the period around St. Martin's Day is thought of as a time 'when the weather gets warmer and sunnier before Autumn definitely comes'. Even in Britain, if Wikipedia is to be believed, the term 'Saint Martin's Summer' was used in the past to refer to the 'brief warm spell' around this time of year, before the winter months began in earnest.
Hmm. For the last few days this corner of the country has witnessed lowering skies and torrential downpours. Today is forecast to be 'windy with showers'.
Update at 9.45 am
The sun is now shining, for the first time in days. Saints alive! But unfortunately it's not warm enough for the beach (see comment from Sarah below).
Posted by Martin at 06:51

são martinho is also the time to eat chestnuts and taste the new wine (água-pé)... and I am still going to the beach today!!!