A few weeks before our visit to San Francisco, we found out that the Commonwealth Club would be hosting a panel discussion of the presidential election in the city during our stay, in association with the Guardian and the New York Review of Books, to mark the new collaborative arrangement between the two publications. The panel was to be chaired by Bob Silvers, founder and co-editor of the NYRB, and would include NYRB regular contributor Thomas Powers,  New York Times columnist Frank Rich, Guardian journalist Martin Kettle, and the editor of Guardian America, Michael Tomasky (whose work I praised in this post). For US political obsessives like us, this was just too good to be true, and we wasted no time in booking tickets for the event online.
So last Monday evening we joined about 250 others in the ballroom of the JW Marriott, just off Union Square, to hear what these commentators had to say about the state of the race, with just a week to go before election day. It was an illuminating if frustratingly short discussion: the event was being recorded for a radio programme and had a one-hour cut-off time, which meant that it ended just as it started to get interesting. This being a left-ish panel, and a fairly liberal audience, there was eager, but nervous anticipation of an Obama victory, and much cautious use of the subjunctive: 'If the polls turn out to be accurate, if he should win ...' etc.
A few highlights: Tom Powers believed that the main problem facing a new president would be Afghanistan, which he thought had the potential to turn into a military and political quagmire, comparable to Russia's experience in that country, or to Vietnam. He made the interesting conjecture that, since John McCain spent most of the Vietnam war in a Hanoi gaol, he failed to experience at firsthand either the deep opposition to the war back home, or the huge social changes that took place in his absence.
Martin Kettle spoke about the reaction to the election abroad, claiming that if the rest of the world had a vote, it would have already elected Barack Obama. He talked about the depth of anti-American sentiment in Europe and elsewhere, arguing that it predated the Bush administration, and seemed to suggest that one of the new president's responsibilities would be to counter this negative attitude. In my opinion, Kettle failed to acknowledge that anti-Americanism might not be solely the fault of the US, or the role of publications like his own in stoking its flames.
Answering a question about the so-called Bradley effect, as to whether white voters would support a black candidate in the secrecy of the polling booth, Frank Rich cited the evidence of the primaries and asked rhetorically, why won't people take 'yes' for an answer? Michael Tomasky said that the Obama campaign was the most disciplined political operation he had witnessed in his many years of covering elections, and drew applause with his response to the question as to what would be his first act if he were the new president. Obama-like, he said he would immediately travel to the state where he had won he fewest votes and give a speech in which he stated that he was their president too and that he would be be a president for all Americans.
You can hear the podcast of the event here, see Michael Tomasky and Frank Rich in conversation after the event in this 'Tomasky Talk' on the Guardian website (I know it was the same evening, since they're wearing the same clothes as when we saw them), watch Tomasky and Kettle in conversation at one of their next stops here, and read Kettle making some of the points he made in the discussion in this article.
It was fascinating to be in America in pre-election week, and to watch the wall-to-wall TV coverage 'live', rather than served up in predigested extracts via the internet. There was perhaps less evidence of election fever on the streets than we had expected, though I overheard a few tantalising snatches of conversation in shops and on street corners, and it was interesting to see at firsthand the way national and local issues mingle in American elections. For every Obama-Biden sign in an apartment window (this being San Francisco, there were very few McCain-Palin ones), there were as many appeals to vote for X for district supervisor, or to support or oppose this or that proposition. The number of propositions on which Californians were being asked to express an opinion seemed endless: while we were there, the San Francisco Chronicle helpfully listed them for its readers, and I seem to recall there were about a dozen numbered propositions and as many denoted by letters. The most contentious, of course, is Proposition 8, which aims to ban gay marriage, and about which liberal San Francisco is much exercised.
We failed miserably in our attempt to bring back any Obama memorabilia from our trip, unable in the short time we were there to find out where everyone was getting their badges and bumper stickers. The nearest we came was this display of election trivia in Borders, which included a McCain doll and Obama playing-cards: 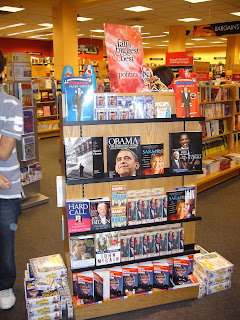 And I liked this creative defacing of the new iPod ad which we came across on Chestnut Street: 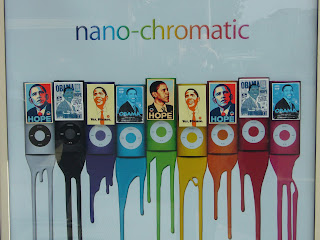