'Love is what Fidel feels for the people'

I wrote here about how my disillusionment with the Sandinista revolution began when I realised that its much-praised mass literacy campaign was more like Stalinist indoctrination than Freirean consciousness-raising. It seems that education policy in Castro's Cuba has followed a similar path. Here's Jon Lee Anderson writing in today's Guardian:

In the early 90s, when I was living in Havana with my family, my eldest daughter, Bella, who was then about six years old, came home from school one afternoon in a state of excitement. She asked me, in Spanish: "Daddy, do you know what 'amor' means?" I feigned ignorance. Taking a deep breath, Bella recited: "Amor es lo que Fidel siente para el pueblo" - "Love is what Fidel feels for the people."

Careful not to show my dismay, I congratulated Bella on her feat of memorisation, and she beamed with pride. She was, understandably, very pleased with her educational achievement.

The Havana primary school that Bella attended was the Eliseo Reyes, named after one of the Cuban guerrilla fighters who accompanied Ernesto "Che" Guevara on his final expedition to Bolivia and who died with him there, fighting for the cause of Marxist revolution. Posted over the school's front door was a wooden sign that read Muerte a Traidores - Death to Traitors.

Bella's school primer had little symbols illustrating each letter of the alphabet. "F", for instance, symbolised "fusil" (rifle), and "T" stood for "tank". The book was sprinkled with Fidel's sayings on the importance of education, study and revolutionary duty. There were pictures too. One depicted a youthful Fidel riding into Havana on a tank. Another showed him in the heat of battle, commanding Cuban troops during the Bay of Pigs invasion in 1961. In the schoolbook, Fidel Castro was always referred to simply as "Fidel".

Inevitably, during the three years we lived in Cuba, Fidel became both a familiar figure and a totemic one to my children - half grandfather, half God. With his deeds and aphorisms the stuff of daily fare, and his face and voice omnipresent on nightly television, they came to understand that El Jefe Maximo was the ultimate guiding hand that controlled their lives and those of everyone around them. He represented the past and the present, and the future too. Fidel, somehow, was Cuba. 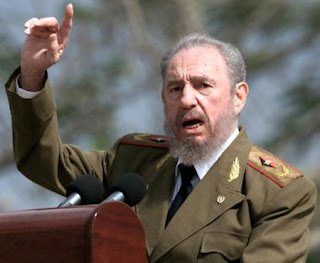 Now who does that remind you of? 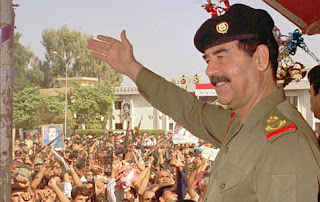 Mosques, airports, neighborhoods and entire cities were named after him. A military arch erected in Baghdad in 1989 was modeled on his forearms and then enlarged 40 times to hold two giant crossed swords. In school, pupils learned songs with lyrics like “Saddam, oh Saddam, you carry the nation’s dawn in your eyes.”

The entertainment at public events often consisted of outpourings of praise for Mr. Hussein. At the January 2003 inauguration of a recreational lake in Baghdad, poets spouted spontaneous verse and the official translators struggled to keep up with lines like, “We will stimulate ourselves by saying your name, Saddam Hussein, when we say Saddam Hussein, we stimulate ourselves.”

While Mr. Hussein was in power, his statue guarded the entrance to every village, his portrait watched over each government office and he peered down from at least one wall in every home. His picture was so widespread that a joke quietly circulating among his detractors in 1988 put the country’s population at 34 million — 17 million people and 17 million portraits of Saddam.

But hang on - weren't there some good things about Castro's Cuba? Didn't he give them the best health care system in Latin America? Perhaps. But then, Iraq under Saddam supposedly had some of the best hospitals in the Middle East.

I'm not saying that Castro's dictatorship was in the same league as Saddam's reign of terror and butchery. But a personality cult is a personality cult, never mind whether it's dressed up in left-wing or right-wing clothing (though those military uniforms do look remarkably similar). And whether in Castro's Cuba, Ortega's Nicaragua or Chavez' Venezuela the same truth holds: socialism minus liberty (sooner or later) equals tyranny.

I hear you on this. If the cost of universal health coverage is prison and torture for dissidents and democrats, than they can count me out.

I wonder if the children’s alphabet also reads like this:
“A is for Amor, B is for Bolivarian Revolution, C is for Che…”