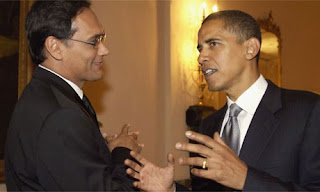 Seems I'm not the only one to have noticed the similarities between Obama's candidacy and the fictional presidential campaign of The West Wing's Matt Santos. Jonathan Freedland mentions some of the coincidences I highlighted back in January: 'a young, charismatic candidate from an ethnic minority, daring to take on an establishment workhorse with a promise to transcend race and heal America's partisan divide', and on the Republican side 'an older, maverick senator from the American west whose liberal positions on some issues had earned the distrust of the party's conservative base'. And Freedland adds a further coincidence that I missed: both John McCain and his fictional counterpart, Arnie Vinick, have to battle for the nomination against a preacher from the Christian right.
But here's the twist. Rather than this being a case of life imitating art, as we all thought, it turns out it's actually the other way round. According to Freedland:

When the West Wing scriptwriters first devised their fictitious presidential candidate in the late summer of 2004, they modelled him in part on a young Illinois politician - not yet even a US senator - by the name of Barack Obama.

"I drew inspiration from him in drawing this character," West Wing writer and producer Eli Attie told the Guardian. "When I had to write, Obama was just appearing on the national scene. He had done a great speech at the convention [which nominated John Kerry] and people were beginning to talk about him."

Attie, who served as chief speechwriter to Al Gore during the ill-fated 2000 campaign and who wrote many of the key Santos episodes of the West Wing, put in a call to Obama aide David Axelrod.

"I said, 'Tell me about this guy Barack Obama.'"

With the Latino actor Jimmy Smits already cast for the show, Attie was especially keen to know how rising star Obama approached the question of his race. Axelrod's answers helped inform Santos's approach to his own Hispanic identity.

"Some of Santos's insistence on not being defined by his race, his pride in it even as he rises above it, came from that," Attie said.

The scriptwriter also borrowed from Obama's life the notion of a superstar candidate. "After that convention speech, Obama's life changed. He was mobbed wherever he went. He was more than a candidate seeking votes: people were seeking him. Some of Santos's celebrity aura came from that."

But as the real-life battle for the Democratic nomination approaches its climax, life has begun to imitate art, with the story of Obama's ascendancy eerily paralleling the West Wing narrative:

In the TV show, Santos begins as the rank outsider up against a national figure famous for standing at the side of a popular Democratic president. There are doubts about Santos's inexperience, having served just a few years in Congress, and about his ability to persuade voters to back an ethnic minority candidate - even as his own ethnic group harbour suspicions that he might not identify with them sufficiently.

But the soaring power of his rhetoric, his declaration that the old divisions belong in the past and his sheer magnetism, ensure that he comes from behind in a fiercely close primary campaign and draws level with his once all-commanding opponent. Every aspect of that storyline has come true for Barack Obama. Axelrod, now chief strategist for the Obama campaign, recently joked in an email to Attie: "We're living your scripts!"

Obama aides will be hoping that the West Wing's prophetic streak holds: Santos eventually emerged as the Democratic nominee from a brokered convention - and went on to win the presidency.
Posted by Martin at 14:05