Tuesday, our last full day in San Francisco, began with a visit to the Yerba Buena Arts complex, just south of Market Street. We walked past the stunning new Contemporary Jewish Museum, designed by Daniel Libeskind (about whom I wrote here): 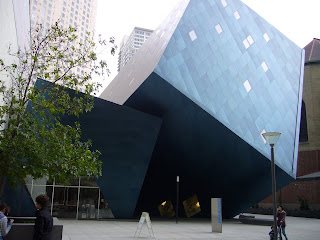 We then crossed the gardens to view the Martin Luther King memorial: 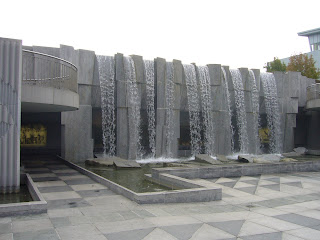 But our main destination this morning was the San Francisco Museum of Modern Art. The guide books are right to say that the gallery's permanent collection struggles to live up to the building in which it's housed. SF MOMA's main strength lies in mid-twentieth century pop art, though the famous Jeff Koons sculpture of Michael Jackson and his chimp wasn't on display when we visited. I was more interested in the small selection of Post-Impressionist and Expressionist works on view, including a temporary exhibition of Paul Klee's sketchbooks. There were also some good pieces by Frieda Kahlo and Diego Rivera, and I liked this Vermeer-ish work by Gerhard Richter: 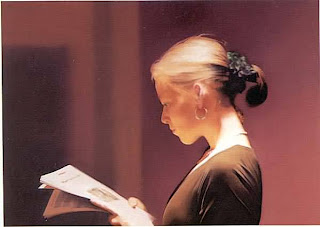 In the afternoon we decided to visit Telegraph Hill and the Coit Tower, going via Battery Street so that our fifteen-year-old son could make a pilgrimage to Linden Lab, home of Second Life. Then it was a steep climb up the Filbert Steps, accompanied by parrots chirping in the trees above, passing hillside houses that could have served as locations for Tales Of The City (Maupin lived around here while writing the books). 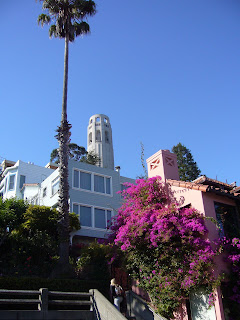 We didn't actually go up the Coit Tower, but the views from the surrounding gardens were breathtaking, and it was good to see the Rivera-inspired murals around the base of the tower, their social realism a reminder of San Francisco's radical heritage. 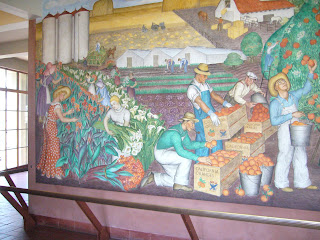 Returning to our hotel, we found ourselves mingling with security men in shades and earpieces, as limousines drew up and disgorged guests arriving for that evening's world premiere of Milk at the Castro Theater. The movie is based on Randy Shilts' biography of Harvey Milk, the gay San Franciscan district supervisor who was assassinated, along with Mayor George Moscone, in 1978. I had brought the book along to read on the flight, having already seen the brilliant documentary film by Rob Epstein.  We retreated to the relative quiet of the hotel lounge, seating ourselves in a strategic position so we could see any celebrities who might happen to stroll through the lobby.
As we sat there, I noticed a familiar face, not to mention a familiar cream pantsuit, at a nearby table. It was none other than Nancy Pelosi, Speaker of the House, taking afternoon tea with a couple of associates. She may have been there for the premiere, or simply passing through her home congressional district. Either way, it took a long time for us to catch the attention of the waitress, who was understandably preoccupied attending to the needs of the most powerful female politician in the country.
That evening, as we set out for a meal downtown, the Milk guests were assembling in the hotel lobby, waiting for their transport to the movie. Unfortunately the premiere had been sold out weeks before, so we were unable to join them. We didn't spot any more celebrities, but we did notice a large number of 'No on 8' badges.
On Wednesday morning, we did some last-minute shopping in Union Square before a final lunch at Scala's, and then got ready to leave for the airport. As we sped down the freeway, the driver had the car radio tuned to KCSM, the Bay Area jazz station that I often listen to via the internet when I'm working at home. Then there was one final celebrity sighting before take-off: in the departure lounge we saw a man and woman being filmed as they walked backwards along the moving walkway. I was informed by my son that the man was Tay Zonday, who apparently is some kind of Youtube star, probably recording his new video.
And so it was farewell to sunny San Francisco, and back to the wind and snow of England. We hadn't managed to do everything we wanted in our brief visit - Golden Gate Park, Haight-Ashbury and the Civic Center will have to be on the itinerary for a future visit. At the end of the day, H. and I are probably more East Coast than West Coast kind of people, but the five days we spent in this sparklingly diverse muddle of a city had been enormously enjoyable and endlessly stimulating.
Posted by Martin at 08:01

Sounds like you had a nice trip. My family lives in the Bay Area and I am heading out there in a few weeks to visit them. +

The murals inside Coit tower are quite nice. I also recommend having a look at the Waterfront (general) Strike memorial.

You can skip on the civic center. Not much to see besides city hall and the bums.

Golden Gate Park is very nice. There are a couple of museums, an arboreum, and the Japanese Tea Garden is always cool to check out.

I used to live on Haight St. It is kind of past its prime. The dot.com craze really changed the neighborhood.

The upper Haight is where most of the tourists go, to see the intersection of Haight & Ashbury, get an ice cream at Ben and Jerry's, etc. The lower Haight used to be much more edgy, with some excellent record shops, decent bars, etc.

Japan Town is not far from the Lower Haight. It isn't as big as Chinatown but worth having a look if you are interested in Japanese food/culture.

If you rent a car on your next trip, it is worth driving over the Golden Gate bridge into Marin County and visiting the Muir Redwoods. They are really beautiful. Last time I was there I saw some salmon swimming up stream. Pretty cool...

Thanks for the suggestions - and I hope you have a good trip yourself.

I'm sorry to have missed the Strike Memorial - and since arriving home, I've seen pictures of the fabulous new academy of sciences in G G Park which make me wish we'd been there.

I forgot to mention the MLK memorial and Yerba Buena Gardens were built on the remains of a gutted working-class neighborhood. Here is a bit:

Soon after the struggle to save the I-Hotel began, a similar affair transpired in the South of Market neighborhood. The San Francisco Redevelopment Agency, pressured by a coalition of the tourism industry elite, large corporations, financial institutions, other downtown business leaders, and City Hall put into motion the Yerba Buena Redevelopment Project.

At the time the site contained more than 4,000 SRO units, as well as many low-rent apartment buildings and the businesses that serviced the community. To lobby in support of the Redevelopment project the socioeconomic elite formed the San Francisco Planning and Urban Renewal Association (the "Renewal" has since been changed to "Research".)

SPUR summed up their motivations for their support of redevelopment in a 1966 'Prologue for Action.' The document, released as the Yerba Buena Project was being considered for approval, offers a stark glimpse of the designs the elite held for the largely poor, immigrant and minority SRO population. "If San Francisco decides to compete effectively with other cities for new "clean" industries and new corporate power, its population will move closer to standard white Anglo-Saxon Protestant characteristics. Selection of a population's composition might be undemocratic. Influence on it, however, is legal and desirable for the health of the city." (Hartman, p. 65)

The Yerba Buena plan called for acquiring and demolishing the SRO communities, by eminent domain if necessary, and replacing them with a convention center, tourist hotels, high-end housing, and shopping. It was approved unanimously by the planning commission, and by a 9-2 vote at the Board of Supervisors in 1966.

In the face of these powerful forces , community members marshaled opposition. They formed the Tenants and Owners in Opposition to Redevelopment (TOOR.) Through lawsuits, lobbying and advocacy TOOR and its supporters were able to delay but not stop the Yerba Buena Project. Importantly they were able to achieve a settlement that led to the production of approximately 1,600 low-income housing units as replacement for demolished SROs. (Hartman, PPG 115)

Perhaps the most significant victory that arose from the organizing of the I-hotel and TOOR tenants was the passage into law 1981 of the Residential Hotel Demolition and Conversion Ordinance. Organizing pressure compelled the Board of Supervisors to pass this law which banned demolition and conversion of SROs unless an in lieu fee is paid to the city's affordable housing replacement fund. Continued community activism led to the strengthening of the ordinance in 1990 as the Board of Supervisors increased the amount of the fee and gave neighborhood nonprofits legal standing to enforce it.

Thanks for this bit of history. It's the kind of thing that tourists are unaware of, especially on a brief visit. The Randy Shilts book on Harvey Milk fills in quite a bit of SF history - particularly the shift from blue collar / port oriented town to a city built on financial industry and tourism in the 60s and 70s. Hard to believe now that Fillmore was a black district and the Castro (Holy Redeemer Parish as was) mostly w-class Irish Catholic.